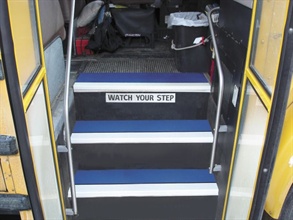 One unusual safety compromise is common mostly to shuttle service: The failure to assist passengers on and off the vehicle.

Passenger assistance to shuttle passengers (most of whom are not elderly or disabled) is certainly an industry standard, as that standard is defined by what a “reasonable and prudent” operator would do. However, in real life, these drivers receive tips. And they receive them far more often for fetching a passenger’s luggage than for spotting or assisting the passenger off the vehicle floor. So drivers are often induced to dash off the vehicle toward the luggage compartment in the rear rather than spot or assist passengers on or off the vehicle. Incidents occur far more often during alighting than boarding (since the distance of a fall forward is much less severe during boarding). And they are similarly more common with elderly and/or disabled passengers.

This failure is problematic largely because the typical “stock” vehicles deployed in many shuttle services have not been modified for public transportation purposes — most importantly, with a stepwell “converted” into the side door. Instead, the typical 24- to 26-inch distance from the vehicle’s floor to the ground surface below is minimally mitigated by the inclusion of a narrow running board (typically still 18 to 21 inches above ground) and possibly a sliver of a side “bumper” or rail (often only 4″ wide) a few inches below that. Plus such vehicles rarely contain any semblance of a coherent hand rail. (The handles on the rear side of doors is a sucker punch: The aft-panel of most double-paneled, outward-opening doors is rarely cantilevered. So when a passenger grabs the door handle and leans on the door, it swings around another 90 degrees, allowing the passenger holding onto it to fall completely out of the vehicle from its floor level.)

On full-size buses with stepwells, like those often deployed to circulate between airport terminals and fringe parking lots, drivers are more apt to spot a passenger in need of assistance boarding or alighting because the luggage is stored in the passenger compartment rather than in a luggage compartment at the rear. That driver is either bounding on and off the vehicle to handle luggage, or handing it up to passengers who have just boarded or handing it down to those who have just alighted. In other words, drivers of these vehicles handle luggage on or near the stepwell — rather than stow it in or retrieve it from some luggage compartment in the rear, or beneath the floor of a motorcoach. As a consequence, boarding and alighting accidents on shuttle services more often happen on small vehicle “conversions” with remote luggage compartments, particularly as the conversion of many of these vehicles did not include the creation of a stepwell.

Regardless of the scenario’s nuances, minor time-savings can be derived from a driver stowing or fetching luggage in contrast to assisting passengers on or off the vehicle. But the time savings are not minimal compared to other safety compromises, since the driver assisting passengers on and off the vehicle still has to stow or retrieve their luggage. This is also true since most other modes make more stops along often much-longer routes than do shuttles on their routinely short routes. Otherwise, because this particular safety compromise is driven by tips, it does not “play well” to jurors.

While studies of shuttle drivers’ tips are rare or non-existent, limousine drivers — who generally assist passengers on and off the vehicle while less often stowing or retrieving luggage  (other than at airports or trips to or from them) — often earn most of their income from tips. But in limousine service, most trips involve only a single pickup and drop-off. And the tips are significant. So limousine drivers generally assist passengers in and out of the vehicle and stow or fetch their luggage.

Next ArticleRolling Turns and Sharp Turns