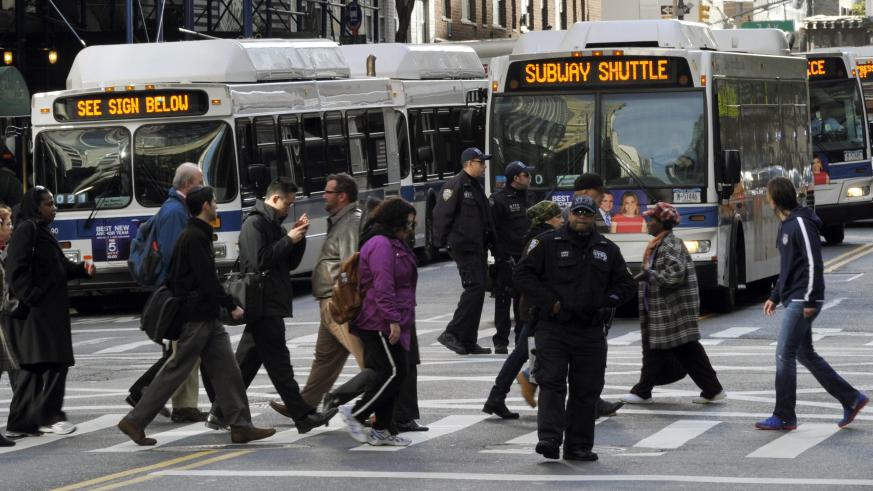 In almost any part of the country other than a rural area, fixed route transit buses must stop only at “designated stops.” Occasionally, in a high-density, urban area, where a “trip generator” occupies all or most of an entire block, and/or there are no or only minor trip generators on the opposite side of the street, mid-block stops are pretty much taboo, largely because they induce or “encourage” jaywalking.

As a result of the mid-block problem, most bus stops are either designated for the “near-side” of an intersection or its “far-side.” All things being equal, a transit bus stop should be located on the far side of the intersection. This positioning reflects the fact that pedestrians (bus passengers obviously among them) are taught to cross at intersections. So at a near side stop, the intersection lies in front of the bus — creating a conflict for an alighting passenger or one crossing to the bus stop: Either cross in front of the bus (where motorists do not expect transit bus passengers to cross) or cross behind the bus, effectively jaywalking across the roadway. Because a bus creates a significant sight-line blockage between any individuals (walking or driving), the position where someone crosses the roadway with respect to the bus stop is of critical importance.

A common problem leading to many accidents is that bus drivers sometimes do not stop at the designated stop position — usually because their schedules are too tight:

The problem with both these deviations is that bus stops — particularly in urban and suburban areas — are not simply pieces of land with a bus stop sign stuck in the ground. They are often cement bus pads, often with bus shelters, and commonly wheelchair-accessible bus pads or shelters. In contrast, a sliver of land that is not “treated” can be anything. (The industry jargon for making bus stops safer and more accommodating is “stop treatment”.) TA President Ned Einstein has served as an expert witness in a number of lawsuits where drivers improvised both deviations — and in the process alighted passengers onto broken curbing, patches of freshly-poured wet cement, or where the rear door’s opening was obstructed by a trash bin, utility pole or other fixed object (in the latter case, forcing the passenger to squeeze out of a partially-opened door into the gutter).

As densities decrease, the insistence on a designated stop becomes less realistic. A passenger may board or alight only once every several miles. As such, the placement of formal stops would require the individuals to walk for several miles. Instead, would-be passengers “flag down” the drivers of approaching buses. Or passengers on-board “chime” their drivers to stop at their desired destination — ideally chiming them early enough for the driver to select a safe place to stop and make all the observations necessary to do so safely. The selection of a safe place to stop is a judgment based on a considerable number of factors, including (presumably) a lot of training, and a great deal of experience.

In transit service, mid-block stops, as noted, are occasionally installed where almost all the passengers would be coming from a single, lengthy origin or heading to a single, lengthy destination. And either there would be few or no “trip generators” on the opposite side of the street, or characteristics of that street (e.g., several travel lanes in each direction) would dissuade anyone from jaywalking across it. In contrast, mid-block stops — preferably on low-traffic-volume “side streets” — are desirable for schoolbuses. This is because these buses contain their own red and amber “traffic signals.” Stopping at a signalized intersection, and engaging a schoolbus’ own traffic signals, would create confusion for motorists.

As an important footnote to the difference between transit and schoolbus stops, and the inclusion of crossing devices on schoolbuses:

These practices are extremely important because motorists operating other vehicles expect these passengers to cross at these positions with respect to the types of buses they are riding. One interesting aspect of crossing-related accidents is the fact that, in nearly half of them, irrespective of the type of vehicle, the crossing “orientation” of the passenger was wrong for that type of bus (see crossingaccidents.com.) Yet this is not always the fault of the passenger. In some cases, passengers are actually forced to cross in the wrong orientation — as, for example, schoolbus passengers in Baltimore and Osceola (FL) who are instructed to cross behind the bus, as a liability ruse (since more schoolbus fatalities and serious injuries occur off the bus than while riding it, and getting one’s schoolbus “over the horizon” before the inevitable third-party car comes along and nails the pedestrian presumably insulates the school district from liability). Otherwise, most passengers forced to cross counter to their vehicle’s proper crossing orientation are placed in this position by a driver’s effort to avoid having to stop the bus on both sides of an intersection — a clear safety compromise that often involves considerable risk.