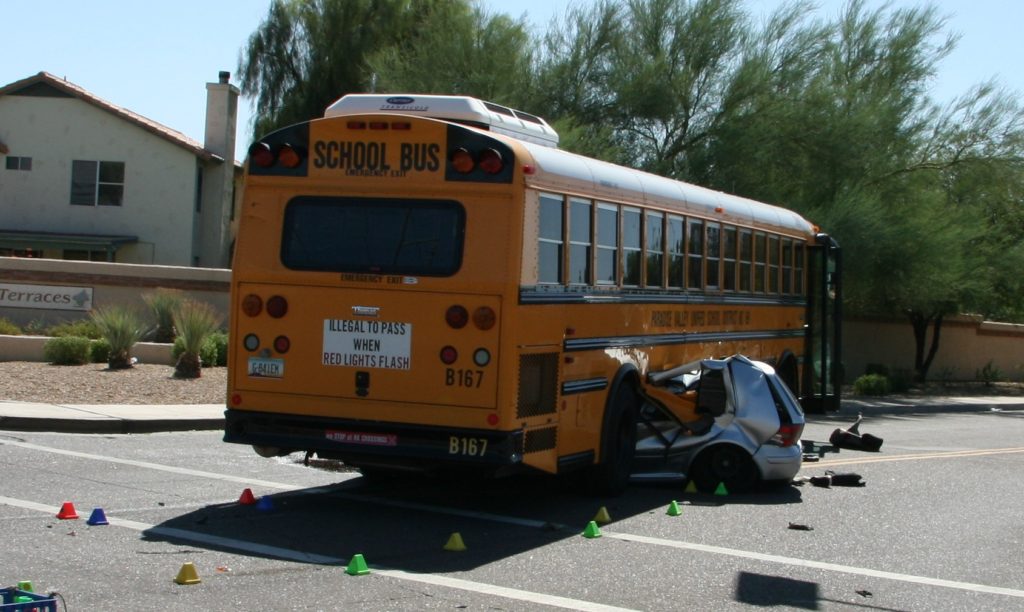 Vehicles with long wheel bases are supposed to make “square” turns. In a square turn, the vehicle’s rear, drive axle should reach the “extended curb line” of the near-side of an intersection before the vehicle begins to make its turn. The arc of a right turn is almost always sharp. And large vehicles making any type of right turn (square or otherwise) into anything but a large, multi-lane roadway must necessarily begin their turns into the perpendicular lane on the opposite side of the roadway. For these reasons, these vehicles generally come to a stop or slow to a crawl before making right turns. (See “Dancing in the Oncoming Lane.”)

Turning right too quickly is difficult because the arc of the turn is so sharp: A vehicle racing around a right turn is likely to literally “roll over.” For this reason, far fewer turning accidents occur during right turns — even while it is a tad more challenging for even properly-trained and properly-acting drivers to see around otherwise blind spots (by “rocking-and-rolling” their heads forwards, backwards and from side-to-side) to the right of them (window posts, exterior rear-view mirrors, etc.) because these objects are further away from their eyes.

In contrast, a significant number of left-turning accidents result from “rolling turns” — often at sweeping speeds (see “The Danger Deterrent“). Occasionally a driver races through a turn to “beat the light.” But even without this specious goal, bus drivers can shave a good 10 seconds or more off the route’s running time by making a rolling turn, compared to the vehicle coming to a complete stop (or coming to a crawl) and making a proper, “square” turn. Done enough times, this stunt can, by itself, shave several minutes off the running time of a single run.

The problems with rolling turns relate mostly to reaction time and distance, and braking distance. Coming to a complete stop, the driver has a chance to look at and around the intersection (including, most importantly, the marked or unmarked crosswalk) before moving the bus a millimeter. And even if the driver does not spot a pedestrian in the crosswalk into which he or she is turning until the bus has begun to turn, it would be traveling — from a square turn at a complete stop, or even a slow crawl — at such a slow speed that the driver could likely bring it to a complete stop in several feet. In contrast, in a rolling turn at 20 mph, during the driver’s two-second reaction time, the vehicle would travel roughly 59 feet.[1] And braking to a stop from that distance would consume an additional 32 feet. Simply put, unless a driver making such a turn, at this speed, spots a pedestrian in a crosswalk 91 feet in front of his or her bus, the driver will not be able to stop in time to avoid striking him or her. (See crossingaccidents.com and turningaccidents.com.)

Because of the enormity of the risks (vehicle-vehicle or vehicle-pedestrian collisions), rolling turns are extremely reckless. To an industry outsider, such maneuvers would not likely be recognized as a safety compromise. But this is not the case for a seasoned transportation professional, much less one who is a veteran expert witness of dozens of turning accidents and scores of crossing accidents.  More importantly, a study conducted by a transit agency in 2015 (see Seattle METRO) documented the relationship between insufficient running time and left turning collisions.

Sharp turns (particular sharp left turns, which can be made at higher speeds) also create considerably more centrifugal force. So in addition to the risks that such turns create for pedestrians, motorists and their passengers outside the vehicle, they create risks for passengers inside the vehicle. Most at risk among these individuals are wheelchair users whose chairs were not secured, or not properly secured. But other passengers are also at risk — particularly standees — given the enormous centrifugal forces that can be generated  by sharp turns. TA President Ned Einstein actually served as an expert witness in a case where three transit passengers — including one seated on the street-side of the bus, opposite the rear door — were thrown through the closed, rear door and into the street during a bus’ left turn from a dead stop, before the bus even completed its turn. (See “The Mysterious Force.”)

There have been numerous studies of vehicle-vehicle and vehicle-pedestrian accidents involving turns (see turningaccidents.com). Many have assigned different percentages of these collisions to one type of turn versus another. However few of these studies include data about the speeds involved when the vehicles whose statistics were cited made the various turns. Nor do these studies note the arc of the turns. This is largely because few police reports, or even many investigations of such incidents, note either of these factors. In contrast, if one can find them and bothers to do so, these factors can be examined closely in a lawsuit. And, as noted, one transit agency actually studied some of these relationships closely and documented a relationship between tight schedules (or “insufficient running time”) and left turn accidents. So, again, because transit, paratransit and particularly NEMT schedules are often so relentlessly tight, turning incidents often represent safety compromises. As noted, the consequences of these turns for passengers exposed to high centrifugal forces (particularly wheelchair users) speak for themselves (see wheelchairtipovers.com).

[1]  The compression of air in the brake cylinders of a vehicle with a pneumatic brake system adds roughly another half-second to the vehicle’s reaction time — beyond the typical .75 seconds it takes for the driver to recognize a problem, and the other .75 second to transfer his or her foot from the accelerator to the brake pedal.