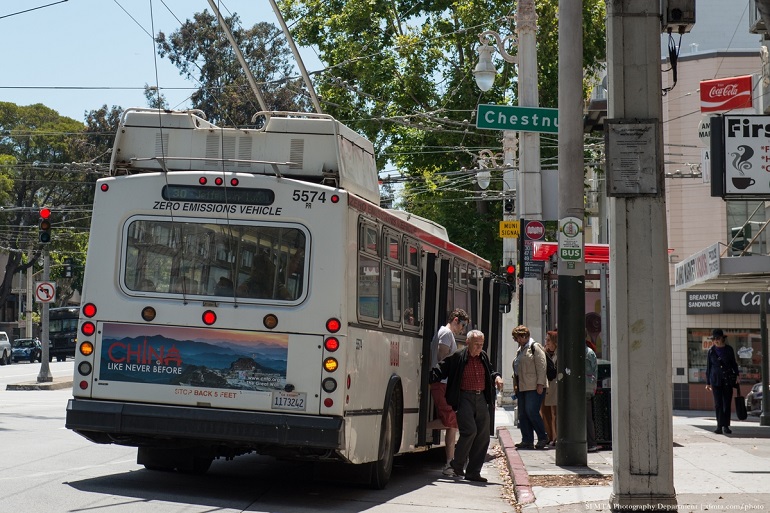 Pulling a large vehicle to the curb takes little time. However, even this seemingly-simple task requires driving skill, knowledge and physical space. Regarding these spatial needs:

This space is required to ensure that all the vehicles’ doors are close to, and parallel to, the curb so that the bus does not have to kneel. And this requirement is particularly important since, as noted above, few transit buses are configured to kneel at the rear door as well as the front door — even while the costs for configuring a bus to kneel at both doors (or all three doors for an articulated transit bus) costs a fraction more than the costs of configuring only the bus’ front door to do this.

One reason that kneeling the bus at both (or all three doors of an articulated bus) doors is a good idea is the fact that, for various reasons, drivers often “nose in” their buses — leaving a triangular or trapezoidal space near the curb, and necessarily further away from it, at the rear door. When drivers commit this error, they create the same situation at the rear door that has made kneeling the bus at the front door an industry standard — when its front door is not close to the curb.

As far as lateral distance, buses are supposed to pull within six to 12 inches of the curb, or more than four feet away from it. If the driver tries to pull closer than six inches, he or she risks banging the vehicle’s right front tire (or front “curb-side” tire, in public transportation jargon) into the curb. This slow-speed collision catapults seated passengers forward (a bigger problem for those seated in side-facing seats over the wheel wells or flip-up seats placed over wheelchair securement positions). Worse, “standees” may be jettisoned forward, and often injured seriously as they are effectively torn from the stanchions which they had presumably been holding onto during the ride. Worse still, many transit passengers (who should be warned otherwise) walk toward an exit door when the bus nears their stop. When a bus’ right-front tire bongs into a curb, these passengers can be jettisoned violently forward.

Another reason that buses are supposed to pull to within six to 12 inches of the curb — or four or more feet away from it — is that the distance between one and four feet away, known  as the “gray zone,” presents an unusual challenge to alighting passengers. (Those with kneeling features should kneel the buses when they are not pulled adjacent to the curb.) Unless this passenger is the first one to alight, he or she is not likely to know how far from the curb the bottom step is until he or she is in “mid-step.” At this point, such passengers are instantly faced with the choice of stepping down into the roadway or “stretching” to reach the curb. TA President Ned Einstein has been involved in several cases where, while stepping off into this gray zone, a passenger had stepped onto broken chips of a curb edge (because the driver discharged passengers on the wrong side of the intersection — see discussion in Stopping on the Wrong Side of an Intersection), into a patch of wet cement, or into a bank of snow that had recently been plowed to the curb.

The gray zone poses less of a risk to boarding passengers. But even boarding passengers have to step down into the gutter to board a bus whose front door lies in the gray zone. Often this gutter is filled with muddy water, ice or snow. And apart from the slippery quality of this substance, the passenger has no idea how deep the snow bank or puddle is. In worst-case situations, this scenario poses a risk to even a gymnast or an acrobat. So an elderly or disabled passenger is clearly at risk stepping down into the gutter, particular when that gutter is filled with water, mud, ice or snow.

Another less obvious, but still serious, problem with “nosing in, is the fact that the bus’ “tail” will stick out into the travel lane. This positioning may cause drivers of vehicles otherwise traveling in that lane behind the bus to merge into a lane to their left (as an alternative to slamming on their brakes, since a bus nosing in is not predictable to a common motorist whose vehicle is following it). Further, the tail of the bus sticking out into the travel lane adjacent to it obscures the driver’s view of vehicles approaching the bus from behind via the bus driver’s street-side, exterior rear-view mirrors. As a consequence, this positioning makes pulling back into the traffic stream a significant risk for both the bus and its passengers, as well as for a motorist (and his or her passengers) whose vehicle is approaching  the bus from behind.

Interestingly, the time needed to pull a bus or coach to the curb is rarely the reason drivers do not do so. They mostly do not do so because of the often difficult and time-consuming task of merging back into the traffic stream. This is particularly true with inner-city transit service, where the bus must pull into a bus stop in a “curb lane” that is otherwise used for parking. During crowded rush-hour traffic, when motorists (and even professional drivers) may not be observant of a bus’ need to re-enter the traffic stream, a bus driver could be delayed, or have to take some risk of a collision (usually being rear-ended) to merge the vehicle back into the traffic stream. So many transit drivers simply stop in the travel lane. Even when the front door is kneeled, this positioning places passengers boarding and alighting at that door at the risk of being struck by a car passing the bus on the right. Or it otherwise forces them to walk across a full lane in a roadway that may not be as well-maintained as the sidewalk adjacent to it — much less a lane wet, muddy, or with a surface covered with ice or snow. Particularly where buses may have difficulty merging back into traffic (e.g., during rush hours in downtown urban areas), failing to pull the bus to the curb multiple times can cut significant slices of time from a route’s schedule. As a result, this aberration is a common safety compromise.

Schoolbuses do not always experience the same types of problems, as requirements for pulling over a schoolbus differ from state to state. For example, in Oregon, schoolbuses are not permitted to pull over at all. They must board and discharge their passengers from the travel lane. Such rules are common to states with a high percentage of wooded areas, which do not often contain lane-wide road shoulders onto which these vehicles can pull over. Pulling over onto a narrow shoulder would leave part of the vehicle’s body in the travel lane, inducing vehicles approaching it from behind to either merge into the lane adjacent to them, or on two-lane roads, to literally cross the yellow center-line and merge into the oncoming lane to swerve around the vehicle. A transit bus may be forced to board or discharge passengers in the travel lane, as well, in rural areas with no bus-wide road shoulders. However, rural areas are far-less-saturated with transit buses, whereas schoolbuses are common. Plus, with the kneeling features accommodated by their pneumatic suspension systems, transit drivers can at least lower the front door (or both doors when their kneeling features are configured to do this) to decrease the distance from the bottom step to the pavement. Schoolbuses, with truck-like leaf-spring suspension systems, do not have this option. And the step up to or down from the 14-inch-high bottom step is more challenging for a small child-passenger. Fortunately, most of these passengers are young and nimble, and a fall does not present the same risk as it does to an elderly or disabled transit passenger.

Regardless, depending on the type of bus and the characteristics of the operating environment (urban, suburban, rural), not pulling the bus to the curb is not automatically a safety compromise. And even when the bus can pull over, it may not be able to do so if another vehicle is illegally occupying the bus zone. As noted, when this happens to a transit passengers, the risks can be mitigated somewhat by the driver kneeling the bus’ front door (or, again, ideally at both doors). These same risks to schoolbus passengers cannot be mitigated in this fashion.

There are also aberrations related to poor coordination between roadway design and bus operations. For example, the curb lanes in a few cities may not provide sufficient width to accommodate a 102-inch-wide transit bus, or even a 96-inch-wide schoolbus. Many major arterial streets in San Francisco, for example, have seven foot wide curb lanes. So were an eight-and-a-half-foot-wide transit bus to pull within six inches of the curb into a seven-foot-wide curb lane, its “street” side (or left side) would stick out two full feet into the adjacent travel lane. This intrusion would understandably induce motorists approaching the bus from the rear (and presumably unaware of the dimensional mismatch of the bus with its curb lane) to either slam on their vehicles’ brakes (if there is still time to) or immediately merge into a travel lane to the left (where there is one). On roadways with only a single travel lane and a curb lane this narrow, vehicles forced to swerve around the bus necessarily swerve into an oncoming lane (risking a “head-on” collision with an oncoming vehicle in the process).